A sweeping vista over a big city like Berlin is one of the highlights of any trip, one of those deep-breath-wow moments. The hectic buzz, hum and action, can leave us with goose bumps. The view is a great reminder that we owe this very experience, like any other, to a vast network of buzzing mini-metropolises hidden under our skin. When it comes to pondering the haphazard dose of good luck that is our existence, there’s no better place to start than our body cells – the miniature building blocks we’re made of. Odd as it may sound, a cell and Berlin have much in common.

The entire whopping diversity of life on this planet is made from cells – from elephant to beetle, from oak tree to moss, from whale to bacterium. We’re no exception. It is your cells that marvel at the Berlin cityscape. They are also behind all your thinking, walking, giggling, itching, yawning, singing – the whole shebang. To understand cells is to understand life. And any city – and I’ll take Berlin because it’s home turf – helps shine a light on what’s going on at the cellular level.

So let’s take a deep dive into the life teeming and vibrating inside you right now. But watch out, you might never look in the mirror the same way again.

So on to the basics. First: Size. Obviously, cells are tiny – we can’t even see one if it turns up alone. We can only spot cells if we meet a vast cell cooperative, which come in a baffling array of forms, from the rose on your windowsill to the grumpy shopkeeper down the road. To get an idea of their tinyness, just consider that hundreds would be needed to hide the full stop at the end of this sentence. Or, have a close look at your fingertip: The tiny ridges of skin that make up your fingerprint are about 20 cells wide. If you were as tall as the Berlin TV tower, your fingertip would be the size of a room, but a cell would still be no larger than a grain of rice. But don’t dismiss the humble cell on account of its size: You’ll be surprised about the frenzied activity within its smallness.

To get a view of what’s going on inside, it helps to start by enlarging a single cell to the size of a living room. Boyce Rensberger’s “Life Itself: Exploring the Realm of the Living Cell” provides a memorable description of what we would see:

“Like all cells, the living-room cell is jammed full of (constituent parts) from wall to wall, floor to ceiling. In the living room cell the force of gravity is negligible, as it is in real cells, and many objects float as if they were weightless in space; others are stuck to various surfaces and move with them. Along with the huge VW-sized nucleus there are half a dozen floppy stacks of beanbag chairs undulating softly in the air. The ‘air’, of course, is the water inside a cell, which is thick with all the molecules and other structures in it, so thick that it is viscous, or jellylike.”

For a rough idea, consider this illustration, even if it brings back painful memories of school book biology. (Thankfully, the parts aren’t even labelled, so nothing to memorise this time.) 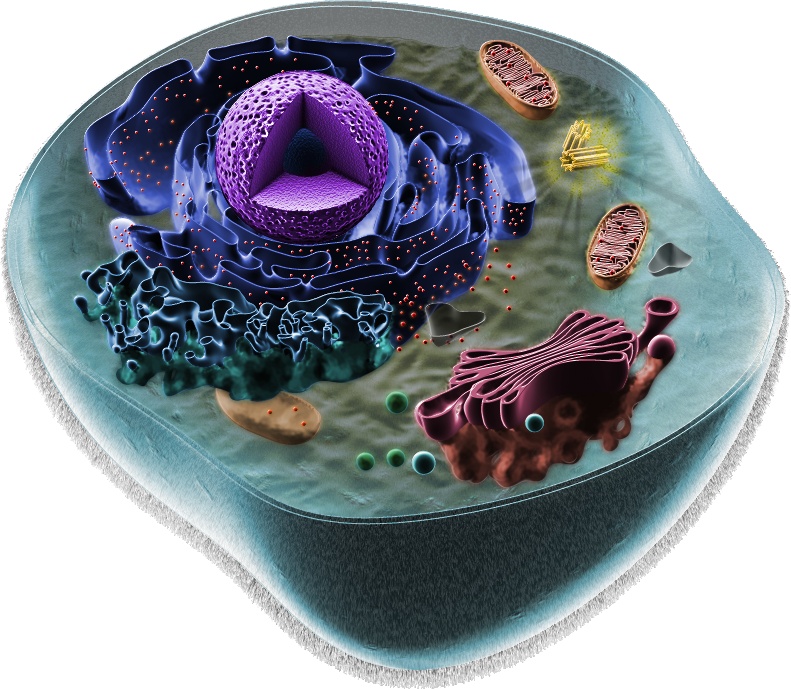 The illustration is useful, but also deceptive:  All the little bits are left out so you can actually see those big bits. And, back to the living-room cell, a snapshot doesn’t do reality justice, as there is lots of movement afoot:

“From time to time, a little bit of beanbag pinches off to form a bubble about the size of a golf ball. It drifts slowly, like a soap bubble, bumps into a long rope that reaches off to the wall, and suddenly begins gliding along the rope, headed for the far wall…there is a dense web of ropes and strings running every which way throughout the room…Scores of long sausages slither about…There are vast areas of great floppy sheets, like a deflated hot air ballon…and there are hundreds of grapefruits and some basketballs hovering all through the room.”

But even if the living-room cell is a good analogy to get a grip on the dimensions, it doesn’t even hint at its complexity. So let’s go deeper still and look at the small bits omitted from the illustration above. Consider this highly accurate watercolour illustration to visualise a tiny corner of the above cell. It’s jam-packed with the machinery that keeps you alive. Again, no movement shown here – which is a good thing in this case, because at this level, things are moving so fast you couldn’t see a thing. 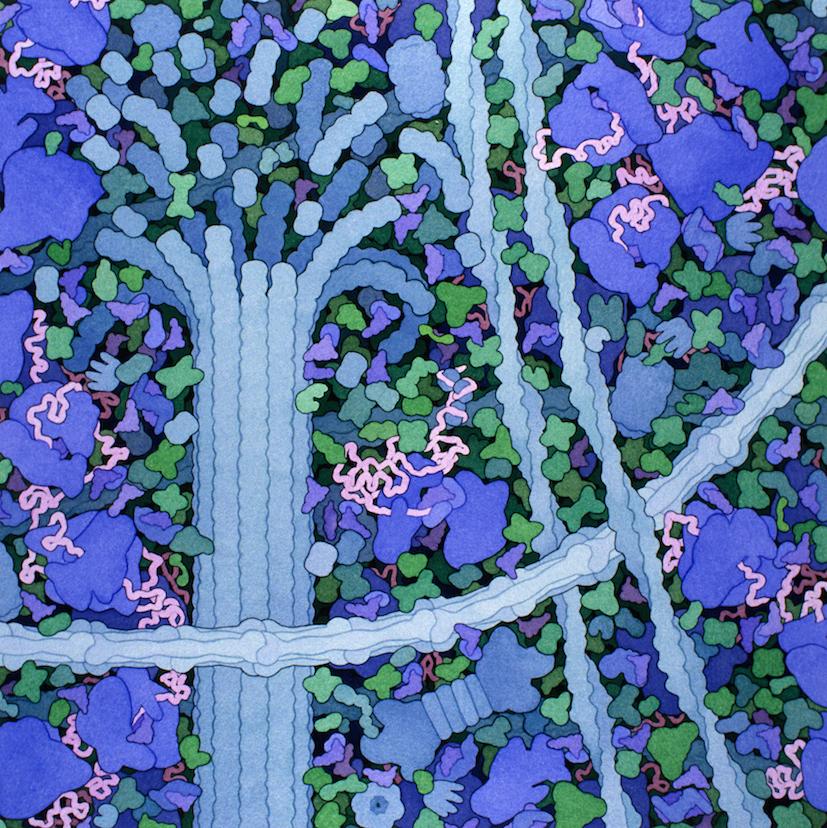 The long structures are part of the cell’s “skeleton”; many of the smaller structures are machines assembling cell components.  Illustration by David S. Goodsell, the Scripps Research Institute

Even simple bacteria are so complicated they have often been compared to a Boeing 747 (though it would have to be an advanced model that can repair and copy itself in mid-operation, which bacteria do constantly). A human cell is around 1,000 times larger, and vastly more complicated than a humble bacterium.

So to get a better idea of the buzzing inside, we have to blow up the cell to the size of Berlin’s city centre. This isn’t as zany as it sounds. The cellular biochemist Guy Brown suggests that a cell should be visualised as a “a vast, teeming metropolis.” In “The Energy of Life: The Science of what Makes Our Minds and Bodies Work,” he writes:

“Some things, such as cars, or cups, appear less and less interesting as you look at them in more detail or a smaller scale. But the opposite has happened with biology…On the surface, a human looks quite a simple kind of thing: a few limbs for manipulating the world and a few orifices for getting things in and out of the body. But go down to a million-fold smaller scale, to the realm of a single cell and its machinery, and we enter a different world of almost unimaginable complexity. Hundreds of thousands of different entities are doing tens of thousands of different sorts of things, at an invisibly frantic pace.”

Our Berlin City Centre Cell, which has been enlarged 100 million times, is now two kilometres across. Atoms are the size of a pea, a single sugar molecule the size of an orange. Most single proteins, which do the heavy lifting in the form of tiny robots, or serve as construction material, range in size from a building brick to a washing machine. They are made by complicated contraptions as big as a van. The cell’s skeleton is made up of innumerable filaments one meter across, like steel girders or pylons. The cell’s power supply is secured by about one thousand sausage-shaped power stations, each 100 metres long. Let’s follow Brown’s description:

This building site in the heart of Berlin will turn into a castle. In our cell, the dimensions correspond more to a single one of the thousand power stations busily responsible for the energy supply.

“Imagine then that vastly expanded cell to be a metropolis floating in space, peopled by billions of small, specialised robots, doing thousands of different tasks, making, breaking and moving trillions of other molecules in order to feed, power, inform and maintain the cell.”

Similar to what’s going on in a city, within the cell an automated delivery service transports machines and raw materials to their destinations via a complex road network that is permanently rebuilt; waste is transported to the outside and fresh raw materials brought in. The recipes for making the cell’s parts, and coordinating the whole operation, contained in our DNA, are constantly copied and checked for errors.

The following animations by Drew Berry are a fantastic and scientifically highly accurate visualisation of some of the things that go on in a cell. But keep in mind that he had to leave out most of the cell’s activity so you can actually see something!

You can watch Berry explain his work in a great TED talk here.
Another great cell animation is this video from Harvard University.

Just like the centre of Berlin, the cell is also a permanent building site. But in contrast to Berlin, which has some serious trouble getting building projects finished on time, the work progresses at lightning speed within a cell. Take a communication port. Cells talk to each other all the time, and their conversations are essential to your heartbeat and your ability to hear. Many of these ports consist of more than 100,000 parts, and are rebuilt every day. Similarly, the complex scaffolding upholding the cell’s structure is continuously forming and dissolving. 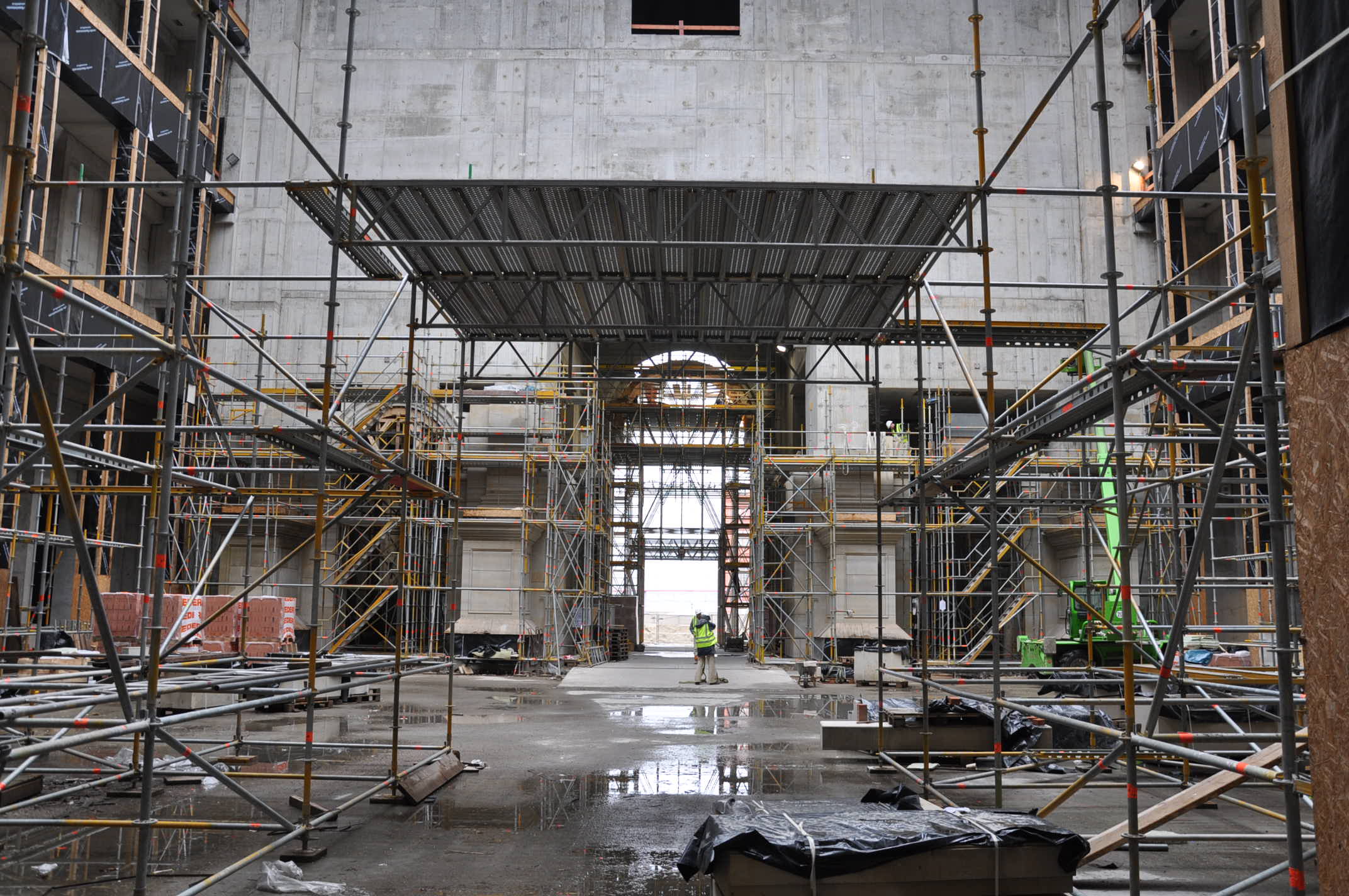 It’s almost beyond imaging how hectic and frenetically busy things are at that level. Simply propelled by the random jiggly motion of atoms, small particles only take one second to cross the entire cell. In our city centre cell, they whizz about like cannonballs – billions of them, all at the same time. Here is Brown again:

“All the small molecules vibrate, rotating and colliding with their neighbours about a billion times per second. The incessant shaking is powered by the heat energy of the body – that is, the random motion of the molecules. And it is this random shaking that causes all of the smaller molecules to wander incessantly around the cell…It is a bit like an out-of-control (three dimensional) pinball machine, with trillions of balls and speeded up a billion times.”

On close inspection, it is little wonder we can barely imagine the fantastic speed of the proceedings within a single cell. Even a single thought requires billions of actions by billions of cells. It is even fair to say that a single thought is billions of interactions within and between cells. Our mind can never catch up with that buzz, because it runs on it – Thoughts are necessarily slower than the actions producing them.

Even if it is impossible to really picture the activity within a single cell, remember there are more cells in one of your fingertips than humans on this planet. In total, your are made up of around 37,000,000,000,000 (37 trillion) cells, according to a recent estimate. Let’s translate that silly number: To count your cells, one per second, would take you more than a million years! And each one of these cells is as busy as the next.

But this astonishing thought should not deter us from appreciating the life of a single cell once in while. For a rough approximation of what goes on under your skin, there is nothing better than to look at Berlin’s buzz, and mentally speed it up – a bit like in the timelapse video below.

And when picturing a cell, keep in mind why this activity fest is happening. For the answer, just look in the mirror again, and consider the words of environmentalist and author Paul Hawken:

“Stop for a moment. Feel your body. One septillion activities going on simultaneously, and your body does this so well you are free to ignore it, and wonder instead when this speech will end. You can feel it. It is called life. This is who you are.”

Eva Bianconi et al 2013: “An estimation of the number of cells in the human body”, Annals of Human Biology Vol 40, Issue 6

Guy Brown 2000: “The Energy of Life: The Science of what Makes Our Minds and Bodies Work”

Franklin M Harold 2001: “The way of the Cell: Molecules, Organisms and the Order of Life”

Paul Hawken 2009: Commencement Address to the Class of 2009, University of Portland

Boyce Rensberger 1996: “Life Itself: Exploring the Realm of the Living Cell”