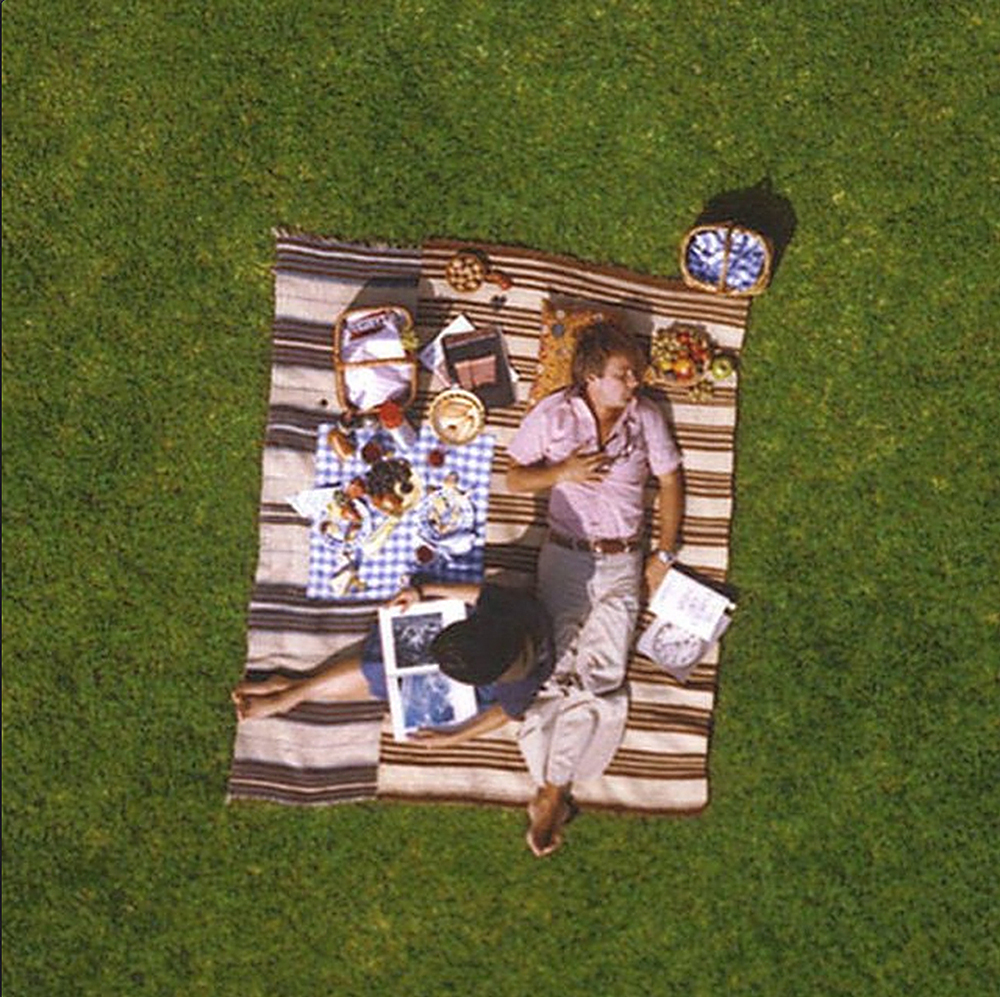 You know that sweaty-palmed, light-headed, dizzy sensation we humans get, when peering down into an abyss or straight up to the top of a tower? This vertigo also sets in when we think about our size in this world: Looking up, the sun and other stars are mind-bogglingly vast; looking down, the world of atoms is staggeringly mini.

Size wise, we find ourselves exactly in the middle-ground between the atoms and the stars. It is only at our level that there are lumps of atoms complicated enough to ask themselves questions like: ‘Is there still beer in the fridge? Should I click on that website that sells snazzy shoes, or is it worth reading on?’ (Not sure about the beer or the shoes, but I hope it’s worth reading on).

Poised in the middle

To explain where we’re at and what we are, there’s no way we can ignore the extremes of our cosmic context and the teeny weeny microworld. Both shape our existence, even if we go about our day to day blissfully unaware of them.

Britain’s Astronomer Royal Martin Rees pins it down: “We are each made up of between 1028 and 1029 atoms. This ‘human scale’ is, in a numerical sense, poised midway between the masses of atoms and stars. It would take roughly as many human bodies to make up the mass of the Sun as there are atoms in each of us…We straddle the cosmos and the microworld – intermediate in size between the Sun, at a billion metres in diameter, and a molecule (a group of connected atoms) at a billionth of a metre.”

Our first-hand experience of scale – ranging from the smallest things our eyes can see to an intercontinental flight – covers just a fraction of what’s out there. In Rees’ words, it is so obvious that we take it for granted that “our universe covers a vast range of scales, and an immense variety of structures, stretching far larger, and far smaller, than the dimensions of everyday sensations.”

A classic reminder of the vast range of nature’s scales comes by way of the short film “Powers of Ten”, made by Charles and Ray Eames for IBM in 1977. Better known for their swanky furniture designs, the pair also did a brilliant job in their “Film Dealing with the Relative Size of Things in the Universe and the Effect of Adding Another Zero”. Even if you’ve seen it before, it’s well worth spending nine minutes on it:

If you’re short of time – or have an aversion to 1970s synthesiser bleeps, here is a sped up version by Google which only takes three minutes, launches from, you guessed it, Silicon Valley, and is also great. The film’s difference, and I’m not just talking soundtracks, shows how our vision has widened since 1977 when it comes to looking at both ends of the size scale.

It’s like things have moved into sharper focus, even over the past 40 years. And the blurriness grows as you move back in time. It’s easy to forget that a few generations ago, people had no idea many of these scales at both ends even existed. “When my grandma Signe passed away at age 102, I spent some time reflecting on her life, and it struck me that she grew up in a different universe,” writes physicist Max Tegmark. “When she went off to college our known Universe was simply our Solar System and a swarm of stars around it…all of which we nowadays consider merely our cosmic backyard.”

Rewind through history and our ignorance grows exponentially. The most dramatic watershed in humans’ appreciation of scales was the invention of the telescope and the microscope in the 17th century. Physicist and novelist Alan Lightman believes the following revelations of hitherto unknown worlds “marked the beginning of a new era in the history of human civilisation, in which our knowledge of nature arises not from our own sensory experience but from instruments and calculations…What we see with our eyes, what we hear with our ears, what we feel with our fingertips is only a tiny sliver of reality. Little by little, using artificial devices, we have uncovered a hidden reality.”

Looking down and up

The Dutch biologist F.W. Went writes in his essay “The Size of Man”  (dating from 1968 and unruffled by efforts to use gender neutral language): “The relative importance of size was completely unknown until man started to probe into the microscopic world with lenses and microscopes. When, in the second half of the seventeenth century, man looked for the first time through a microscope, he suddenly became aware of an entirely new world – until then almost unsuspected, the micro-world.”

The Dutch linen draper Antonie van Leeuwenhoek was the first person on the planet to catch a glimpse of life in this microworld almost 400 years ago. He was instantly wowed by his discovery of teeming life within a humble drop of water, as he wrote in a letter:  “Many of our imaginations and investigations of nature are futile, especially when we see little living animals and see their legs and must judge the same to be ten thousand times thinner than a hair of my beard…the whole water seemed to be alive with the multitudinous animalcules. For me this was among all the marvels that I have discovered in nature the most marvellous of all, and I must say that, for my part, no more pleasant sight has yet met my eye than this of so many thousands of living creatures in one small drop of water, all huddling and moving, but each creature having its own motion.” 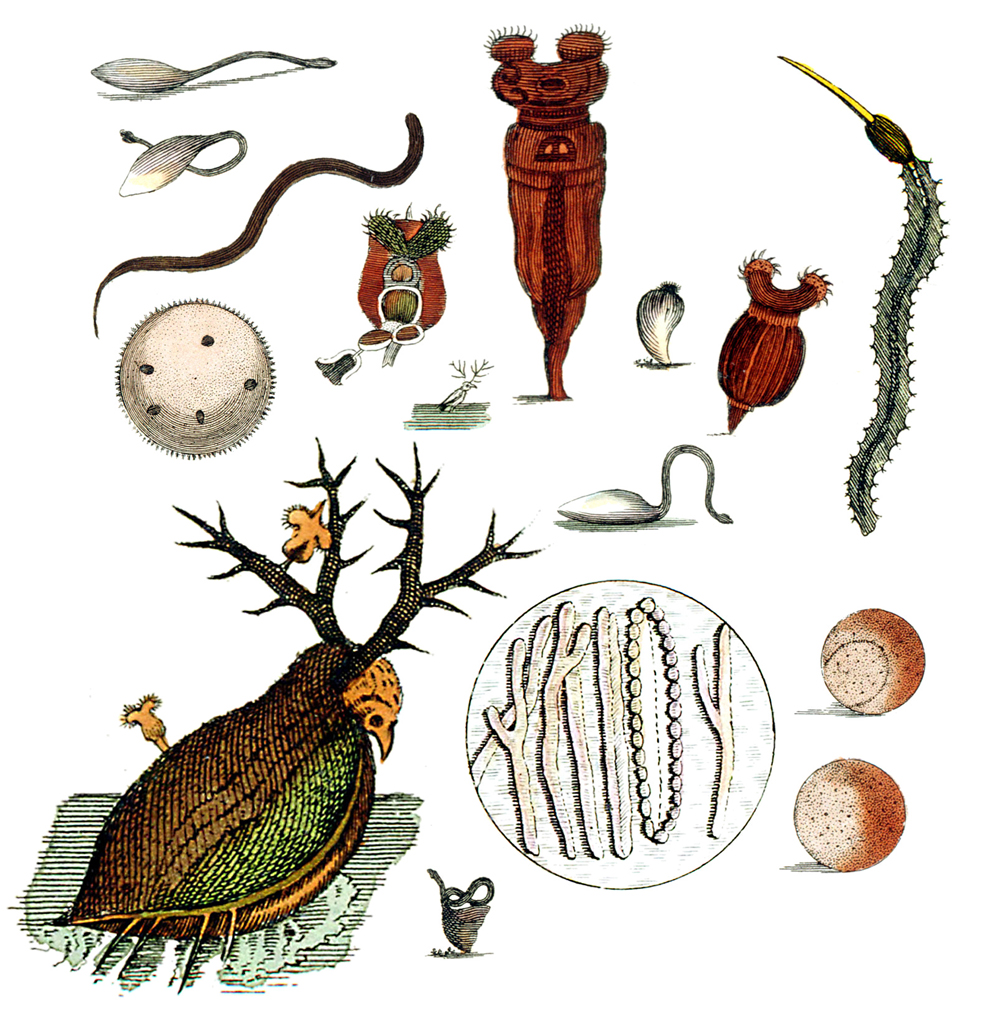 Little wonder Leeuwenhoek’s observations were a sensation. The microworld in a drop of water seen through a microscope continues to amaze today. But at least our drinking water is no longer a ‘monster soup.’ 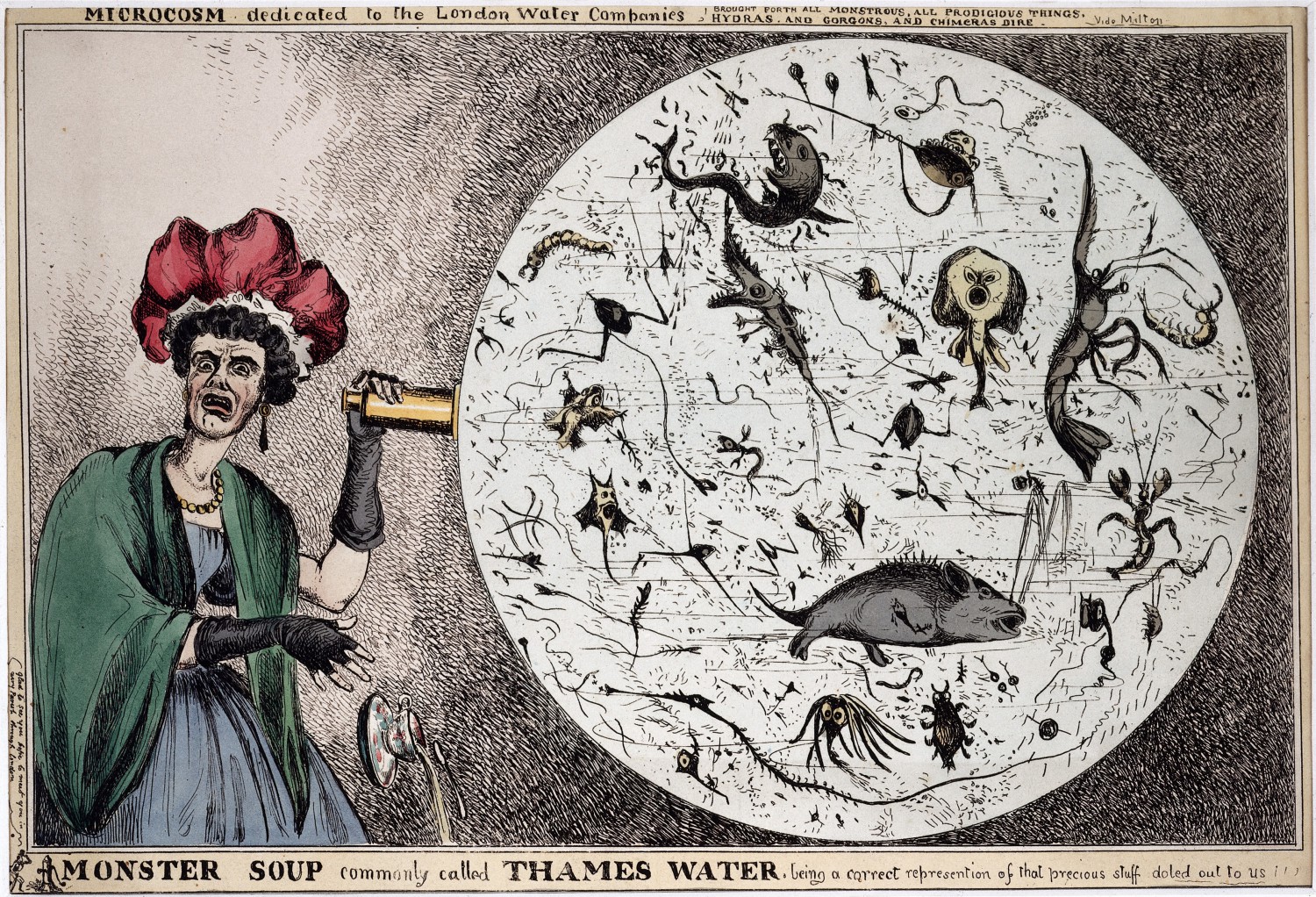 Even before Leeuwenhoek used lenses to peer down into the microworld, Galileo Galilei had used the new technology to explore the opposite direction, gazing at the moon, planets and stars with his telescope. He climbed new size scales when he realised the haze in the night sky we call the Milky Way consisted of innumerable stars invisible to the naked eye. He reported his telescope “set distinctly before the eyes other stars in myriads which have never been seen before, and which surpass the old, previously known stars in number more than ten times.”

Galileo also turned his telescope to the moon. The craters and mountains he spotted disrupted the central religious belief that heavenly bodies were perfect and unchanging, while his discovery of Jupiter’s moons proved that not all celestial objects circled the Earth.

“Van Leeuwenhoek looked down through a microscope to find a small world,” writes paleontologist Neil Shubin. “Galileo looked up to the sky and revealed a huge one, with incomprehensibly large planets and vast distances. In van Leeuwenhoek’s world, we are humbled by the diversity of microscopic life beneath our noses and within our bodies; in Galileo’s, by the sheer size of the world around and above us.”

Sixty powers of ten to make the universe interesting

Since the times of Galileo and Leeuwenhoek, we have learned that nature is both much larger and much smaller still than both discoverers could ever have imagined. To illustrate today’s known range of sizes, Rees uses an image of the ouraborus, described by Encyclopaedia Brittanica as “the emblematic serpent of ancient Egypt and Greece, represented with its tail in its mouth continually devouring itself and being reborn from itself.” It “expresses the unity of all things, material and spiritual, which never disappear but perpetually change form in an eternal cycle of destruction and re-creation.” 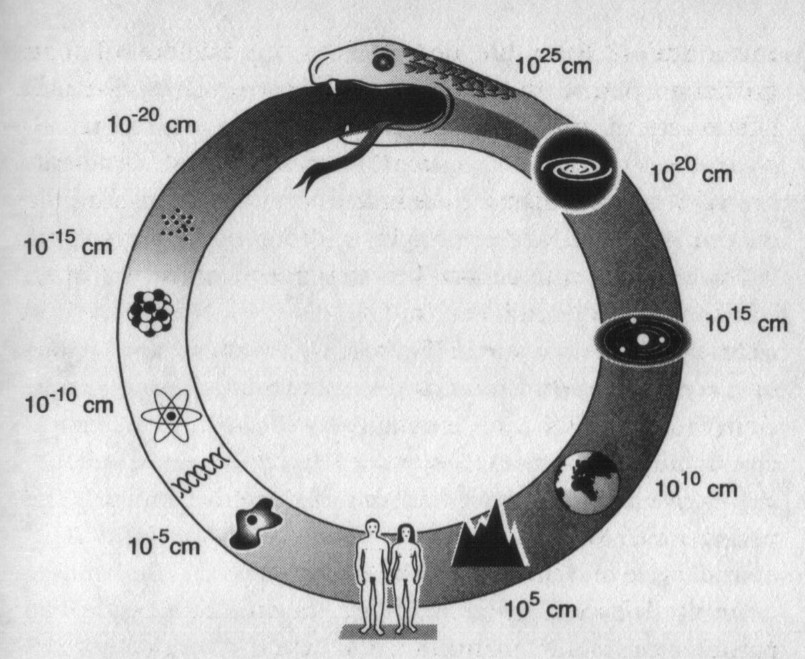 The ouraborus, with the microworld of atoms on the left and planets and galaxies on the right

“Lengths spanning sixty powers of ten are depicted in the ouraborus. Such an enormous range is actually a prerequisite for an ‘interesting’ universe. A universe that didn’t involve large numbers could never evolve a complex hierarchy of structures: it would be dull, and certainly not habitable,” writes Rees. “The very hugeness of our universe, which seems at first to signify how unimportant we are in the cosmic scheme, is actually entailed by our existence!” He insists that the vastness of space shouldn’t surprise us – it’s simply that “creatures like us require special conditions to have evolved.”

And the vastness of it all shouldn’t make us feel too weak at the knees, Rees says. After all, when it comes to complexity, we might dwarf it all. “The amazing and fascinating complexity of biological evolution, and the variety of life on Earth, makes us realise that everything in the inanimate world is, in comparison, very simple…Things are hard to understand because they are complex, not because they are big.”

You MUST try this fantastic toy to explore scales (sound can be switched off at top right).

However hard it might be to get our head around nature’s scales: Without this enormous range of sizes, there would be no us. Things as complicated as humans can only be constructed with a mind-bogglingly huge number of component parts. This is why atoms appear so tiny to us. At the same time, only a huge cosmos can produce the atom-fusing furnaces we call stars, and provide the time necessary to develop beings like us.

Enjoy everything both ways!

Nature’s scales are so enormous that our little brains simply can’t keep up. “Science has vastly expanded the scale of our cosmos, but our emotional reality is still limited by what we can touch with our bodies in the time span of our lives,” writes Alan Lightman. “Modern science has revealed a world as far removed from our bodies as colors are from the blind.”

Little wonder that scales tend to confuse us: 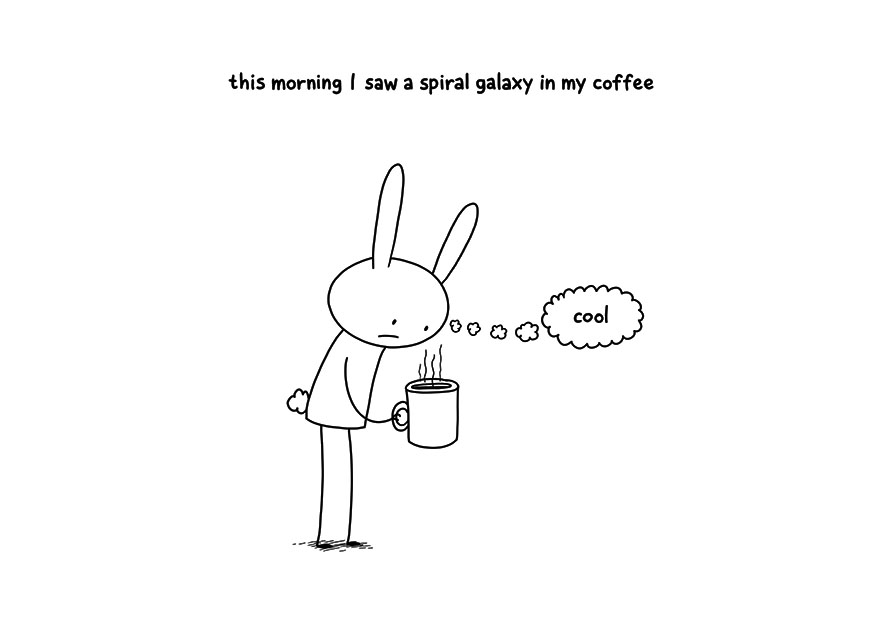 From Dirk’s wonderful Big Bunnies – check out his website.

But for us, size is everything if we want to understand the world, according to Lightman. “Of all (the) different aspects of things, none seems more immediate and vital than size. Large versus small. Consciously and unconsciously, we routinely measure our physical size against the dimensions of other people, animals, trees, oceans, mountains. As brainy as we think ourselves, our body size, our bigness, our simple volume and bulk, are the first carrying cards we present to the world…Somewhere in our fathoming of the cosmos, we must keep a mental inventory of plain size and scale, going from atoms to microbes to us humans to oceans to planets to stars.”

But let’s not get too dizzy and sweaty-palmed from the sheer vastness of the numbers that take us from the microworld to outer space. Instead, let’s enjoy hanging out midway between atoms and stars. Here, who better to listen to than the good-humoured physicist Richard Feynman: “People find these numbers inconceivable, and I do too…The best thing is to relax and enjoy the tininess of us and the enormity of the rest of the universe. Of course, if you’re feeling depressed by that you can always look at it the other way and think about how big you are compared to the atoms and the parts of atoms, and then you are an enormous universe to those atoms. So you can sort of stand in the middle and enjoy everything both ways!” I’ll leave you with Feynman’s giggly enthusiasm, and be warned, it’s contagious.

Neil Shubin (2013): “The Universe Within: A Scientific Adventure”